This is the associated blogpost that goes with this Youtube video:

Nowadays, we have many tools at our disposal to make comics. There’s all kinds of materials, tools, programs and apps. It’s easy to get overwhelmed by all the choices that we need to make when we start out.

I want to start by saying that there’s no right and wrong answers. You can make comics in every single way. 100% traditionally and 100% digitally. And everything in between.

You can make comics on Post-it notes, or you can make them in any program.

What’s best for you is a very personal choice and it depends on a few things.

In this article I’m going to dive into the pros and cons of both traditional and digital comic making. And I will pose a few questions that help you decide on your comic making media.

It’s super easy to get started making comics, just with paper. You don’t need any expensive equipment. Like iPads, computers, programs like Photoshop, or one of the many others. You can start with paper and a pencil, that’s it. Or a pen and a Post-it note. You can make a simple comic in pencil.

Everybody can make comics. And this is one of the very big reasons why.

2. Having to be more deliberate about the steps you need to take

Another pro is that, once you’ve chosen your materials you’re limited to that materal. You have a clear idea about how your comic is going to look.

So you need to plan every single step carefully.

I noticed that, when I work digitally, I have a tendency to zoom in. Go in on all the details. Details that you might not even see when the page is published on the web.

So I actually see having to be a little more deliberate as a pro. Because you’re less prone to noodling and over-rendering. Thus, saving time.

And the last pro is that you will have original artwork to sell. And you can imagine that if you sell an original page of your comic, you can ask a pretty good price for that.

You can bring them to cons and sell them there. Or have them up in your webshop as a unique piece of artwork.

Of course, there’s a few cons to working purely traditional as well.

If you’re doing a webcomic, you have to digitize the end result of your traditional comic.

So that means scanning it in or taking very, very good photos. And that can be tedious. You might need to do some clean up: touch up the colours a bit, or erase some grain. All in all, it takes some work.

A big con to working with traditional media is, of course, not being able to erase any mistakes you make.

You might still be able to cover some thingsup with white gouache. Or, if you’re going to digitize it later, fix some mistakes.

But, it’s a big advantage that digital media has over traditional tools.

And the last con for traditional art, is that you can make less use of certain shortcuts.

There’s many ways in digital programs that you can speed up the comic process. And doing it traditionally will just take more time.

For example: if you hand letter your comic, that will be slower than copy-pasting your script on a page.

One very big pro of working digitally is making use of all the shortcuts.

I made a video for my Youtube channel, last week, that is about flatting your comics. You can make use of smart shortcuts like these that speed up the process of making your comic page.

Making the balloons, making layouts. These steps often go a lot faster in the digital programs available to us.

2. One-time investment in your tools

Another big pro is that oftentimes it is a one time investment that you need to make. Or at least for a very long time. A computer, a tablet and some software is often all you need, if you can afford it. (This is a big drawback. It’s a big investment up front)

A lot of software is becoming subscription based, which makes this pro a little less relevant. But there’s been reactions to that as well, with software like Affinity.

But a pc, tablet and Clip Studio Paint will serve you for years and years. that’s a one time investment. Different from for markers or paint, for example.

And then the third pro. Making comics digital makes them very portable. Best example is if you make comics on an iPad with an Apple pencil and then use an app like Clip Studio Paint.

This makes comics work available to you everywhere. And it frees up some time for you to be able to work on it more regularly.

1. The tendency to make everything perfect

I already mentioned this when I was talking about traditional artwork: the tendency to noodle, to over-render, to zoom in too much and to go into too much detail.

I hear from a lot of artists that, when they work digitally, they have a tendency to be more perfectionistic about their art. When you work on a traditional piece too much, you will mess it up. But in digital you can undo and redo to infinity.

So you can just keep noodling forever. And that can be a big con.

2. Forgetting to back up

Second con. You need to be mindful about making backups.

I’ve heard more than once that people had a computer crash. Or that they were working on something and their app crashed, or Photoshop crashed.

Recently there was a Procreate update. And some people updated and lost all of their work, which is a nightmare.

You need to make sure to back up.

And even for traditional work some form of backup in the form of photos or digitization is helpful.
I had my bag stolen ones and there were so many thumbnails in that bag. It was one of the worst things in that bag that got stolen.

But when your is mostly work digital, especially, take your precautions.

3. No physical art to sell

The last con I want to mention is related to what I mentioned earlier, and that is you don’t have original art to sell.

Some artist’s work around that by selling a limited amount of prints of their digital art. You can absolutely do that. But in general, you can ask more money for a traditional piece of artwork. And it can be more in demand than digital artwork.

So one way to circumvent all of these cons, for both is, of course, working in some form of hybrid. It’s actually what I do as well.

For some reason, this doesn’t go as smooth for me, if I do it digitally. I start noodling and and my thumbnails just don’t come out right. I might do some clean up on my thumbnails digitally, but that’s it.

For my pencils, it doesn’t really matter to me. I like sketching on paper. I like pencilling on paper as well. But I’ve done both and they’re both fine to me. And as long as it’s not the final product, it doesn’t matter for me. I ink over it, anyway. The sketch doesn’t need to be neat or anything. As long as I know where to put my ink lines.

But everything that’s part of the final end product I want to do digital. Because I don’t want to be dealing with anything like scanning and touching everything up.

I also like having adjustment layers and being able to manipulate my colours in an easy way. So that’s the reason I do that.

And you can do other hybrids. I know that Jason Brubaker, for his comic Sithrah, did thumbnailing and sketching digitally. And then print it in light blue and ink traditionally on top of it.

So if you really like inking with actual ink, then you can do that, too. Some people do everything with traditional media and then do only digital colour. (some even do the shading with marker and then lay a final colour layer on top, in Photoshop.

Question 1: What media are you already familiar with

Especially for newer comic artists, I always suggest that you start with the materials you already know.
Because if you have to figure out how to make comics AND figure out a new medium…that can be tough!

You can do that for a two page comic, but for anything really long I’d advise you to not bite off more than you can chew. Start with something that’s simple for you. Something that comes easy to you.

That’s my biggest tip there, when you’re starting out.

There’s an exception. And that’s when your comic has a goal that sounds like this:

Question 2: Is there any technique, a certain medium or program that I want to learn?

Again, when you’re a new comic artist, I want to ask you to think twice about this. Because you really want to figure out the comic process first and keep it really simple for yourself at first. And when you’re familiar with the process, go all out with all the new stuff.

My first comics were all pencil. And then, later, some ink and some coloured pencil. I didn’t use all the fancy stuff, at first. It was what I knew. Later I taught myself to to do art digitally.

But if you really want to challenge yourself with a certain technique. Or maybe you want to make a watercolour comic. Or you want to teach yourself Clip Studio Paint. What better way to do that than to make a comic?

So if you want to challenge yourself in any way, then that informs your comic making as well.

Question 3: Do you want your comic to have a certain kind of look?

A lot of people will like that their comic still has some traditional, look or feel. Other people love things looking digital. They will go all out with gradients. That’s totally fine, of course. You can make your comic the way you want it to look.

You can ask yourself: how do I want my inks to look? Do I want to hand letter my balloons, because it fits my comic the best?

A note of caution: there are those super-rendered, painted comics out there. But those are usually made by people who have a lot of experience. They can crank out that style pretty fast. Or at least faster than average.

At first you might want to look at what you can crank out the fastest. Something that will still look good. But then, the more experience you get and the faster you become, then you can go for more complicated looks. Or have a certain certain aesthetic to your comics.

But if you really want to have a certain look, then this is a good question to keep in mind, as well.

Like I said, you can take a ballpoint pen and a stack of Post-it notes and you can make a comic like that.

All of this stuff is actually one of the first steps to take when you start your comic. When you are still figuring out how you want your comic to look.

I will launch that, this fall, on Kickstarter. You can sign up for my notification list here so I can send you an email to moment my course goes live on Kickstarter.

That was it for this week. I want to thank you so much for dropping by! Feel free to subscribe to my email list to be notified of new videos or articles and occasional freebies, below.

Go out and make some comics! 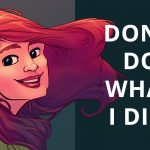