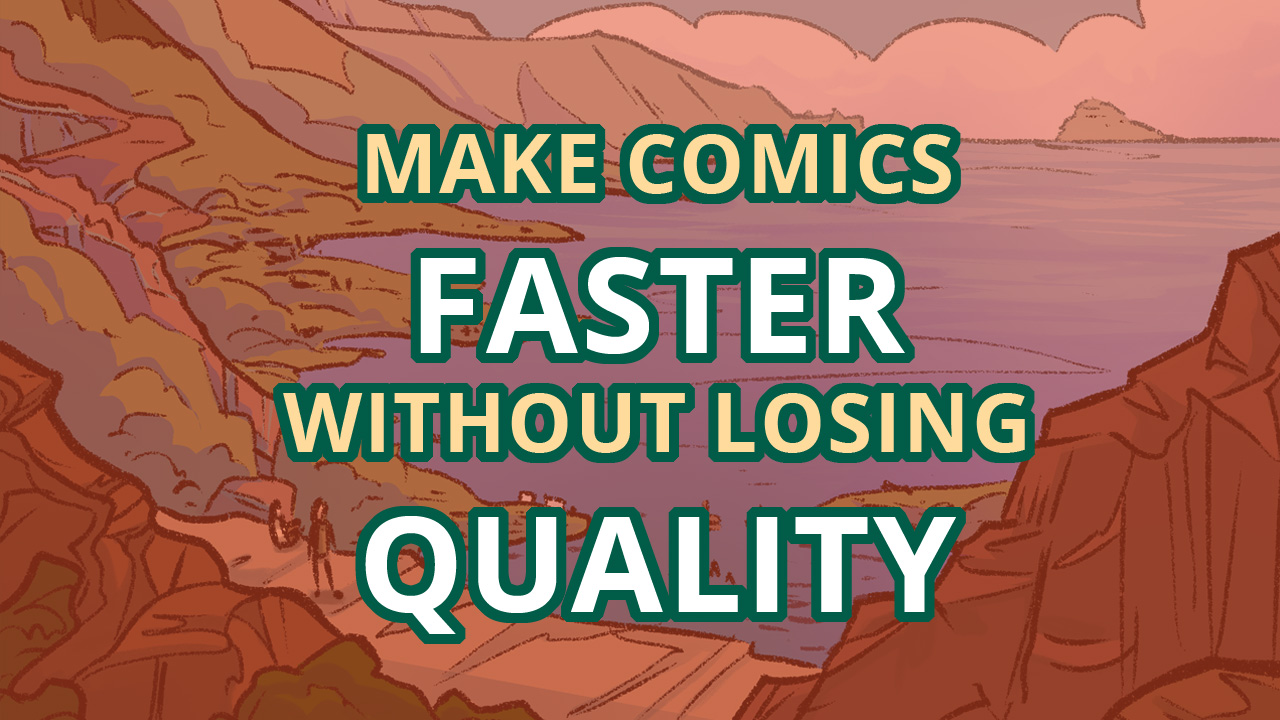 We want our comic pages to look good. But we also want to churn them out in a reasonable amount of time.

In this week’s video I show you how drawing MORE isn’t necessarily better. And how you can increase your speed by using your art skills to the max.

I recommend watching the video to see these principles in action. But here are the key takeaways from the video:

Make sure you know what it is that you want to communicate with the page, and within the panels themselves.

If you know what you want to communicate, there’s no need to add extra “stuff.”

Sometimes the info you need to get across requires an elaborate background. Sometimes a close up. As long as you make sure to have variety in size, shape and amounts of details, you don’t have to make every panel an elaborate, rendered masterpiece. In fact, too much detail can hinder clarity and communicating exactly what you want to say.

Use shortcuts in your designs that speeds things up.

Be careful making design choices that add up.

Imagine a main character wearing a shirt with 5 buttons on it. You might think that those 5 buttons don’t add too much time. But if your main character appears three times, on average, on every page. And they wear that button shirt for half of the story. In your 100-page comic you now have to draw those 5 buttons 150 times. That’s 5750 buttons. 5750 seconds. That’s 96 minutes of just drawing buttons.

This sounds trivial, and if the buttons look really good and you like them then of course, draw them! But how many of those design choices are there in your comic? And how many of those do you actually need? Just changing up small details can free up a lot of time here and there.

Make use of atmosphere and shadow to lose details.

Both in the shadows and in places that have heavy atmosphere, detail will be lost. This means having to draw less detail, too. Atmosphere lays a heavy layer of white, blue or sunset colours on top what’s far away from us. The further away, the greater this effect. Using this means having to draw less detail and also increasing the depth in your panels. In shadow, the values are pulled the opposite way: towards the dark tones. Details become lost. Use this in your panels as well.

Composition and thumbnails are your friend here, to plan for this all.

So, you see: you don’t have to lose quality over speed, at all. If anything, drawing too much can even cost you clarity. Make sure it’s clear to you what you want to communicate. Find the best compositions and elements to get that across as clearly as possible. And forget about the rest.

Simplicity is a hard skill to learn. But so worth it.

While we’re on the topic of not doing more than you need to, I’ll be launching a course, How to Start a Comic, on Kickstarter this fall. It takes you through the entire pre-production process, all the way to making your first pages. It’s specifically designed to help you not spend time on things that don’t matter and that will hold you back from starting your comic.

The Kickstarter will feature a special early bird / pilot price for people who back the Kickstarter. So don’t miss it! Be notified the moment my course launches by leaving your email address here.