A good character design “reads well” which means the silhouette of the character is clear and appealing and people don`t have to second-guess how the character looks or don`t get distracted by unnecessary details.

For the next main character of the Reminiscence comic, Max, the challenge laid in his silhouette.
Here he is, along with the description of his character:

Bern and Max know each other since their early school days. As the son of a high rank police officer, Max wasn`t intimidated by Bern`s status, like some other kids. He appointed himself as Bern`s ally and friend and so they became and stayed best buddies through their years in school and following education.
Max is the oldest of the children in his family, with two younger sisters and a younger brother. He`s just out of the police academy and is now a policeman, just like his father. It`s all he ever wanted. He is good and very passionate at what he does, very responsible, with a high sense of ethics. He can be short-tempered though, and a bit impulsive when he is angry, He`s quick to jump into action and will do anything for his family and friends. When he is troubled or worried about something or someone he can get a little grumpy, but usually he is in for something fun to do or a good laugh.
He shares a secret with his childhood friend Ivory that`s made him distrusting her. Once that happens it can be very hard to regain his trust. The broken relationship with his friend troubles him. This, and the absence of his father who is away on a mission for his country but who hasn`t been heard from since.

I didn`t have to search long for the direction of where to take this character. His personality was the clearest in comparison with the rest of the cast and I knew I wanted some variation of skin colour. Now it was time to start searching again for how he would look exactly: 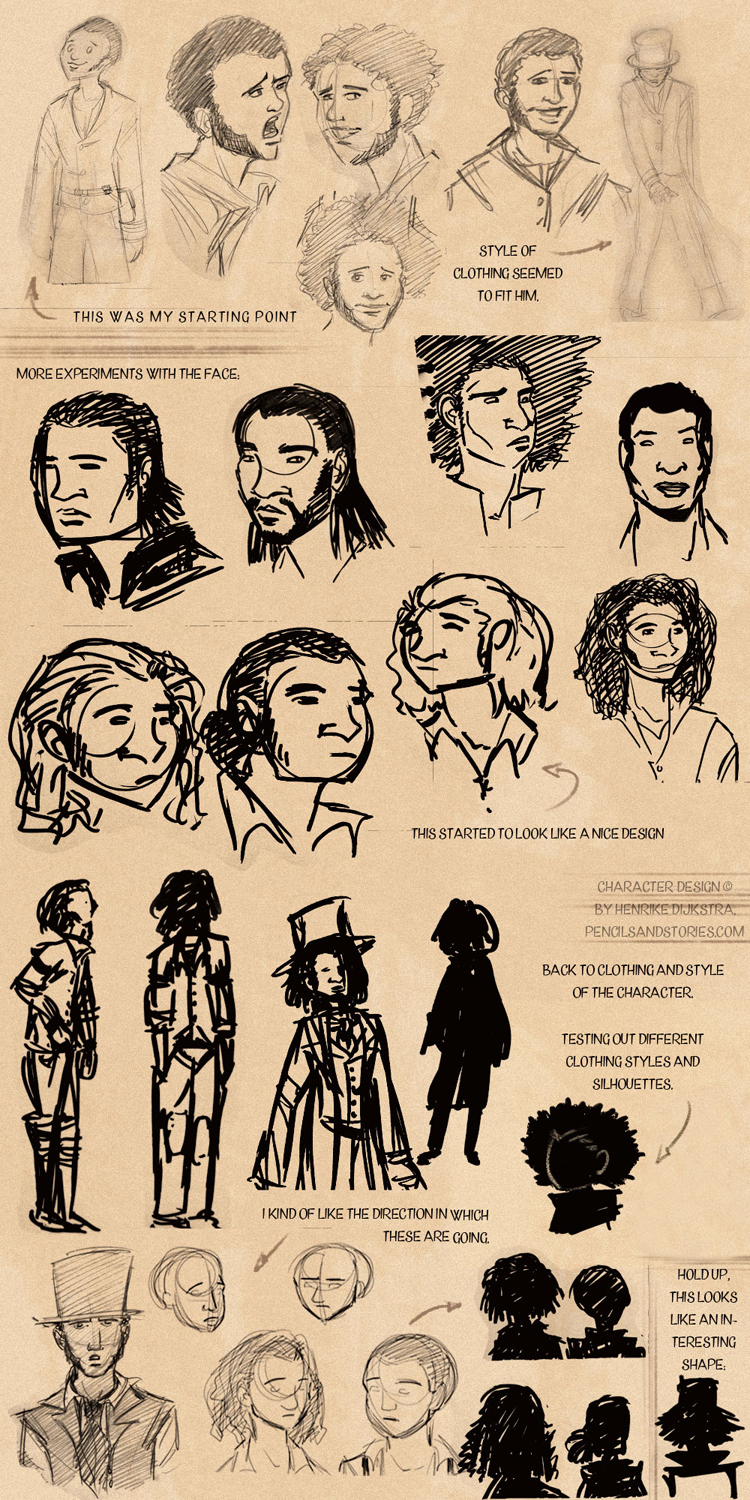 His style of clothing was soon very clear. He is the more gentleman-like figure in the group of friends. A bit more formal and sophisticated. It seemed to fit his character well, because he always wants to do the right thing, live up to people`s expectations, no matter what. And not only does it fit the character, let`s face it: who doesn`t love a man in a long coat and gilets? I certainly love drawing them. (Remember, one of the best things you can do if you want to make a long form comic is to put stuff in it that you love to draw, because you`ll have to draw certain things tons of times!)

Next I searched for the right shape of the face. And I debated if I should give him much hair, since all my characters usually have a lot of hair. But I just love drawing it, I couldn`t help myself. Also I really liked the shape of the last silhouette. So I decided he should have longer hair, but this is where I got stuck. I wanted to do something with dreadlocks, because they are awesome, if done well. But I struggled to make them behave as one shape. I have a tendency of drawing hair that goes all over the place, but that doesn`t help with the readability. I wanted to keep this simple and have the dreadlocks be a certain kind of style that fit the character. Here are some of the sketches:

I struggled a lot and went with the style that gave the character the most appeal for me, but up to the point of this blogpost I still wasn`t sure about on which point of his head his hair should start, where the dreadlocks would be tied together and where the shape should start going outward. I kept drawing his hair differently every time.
This is where Photoshop comes in handy. I copied the base of Max’ head multiple times and just tried different ways of drawing the dreadlocks. The fact that his hair is almost black makes that his hair must absolutely have a good, readable and appealing silhouette, or else it`s just this weird dark shape around his head.

The final profile image at the top of the post is the final design what I went with. What do you think?

Next week: the only girl in the group of friends, Ivory.

Crafting a story – Designing the protagonist