February 2nd: Make a drawing/painting with these words: “jungle” “hairspray” “chair.”
February 3rd: Take a kind of flower and make a house/building/hut etc based on it.
February 4th: Take a map from somewhere you’ve never been before, study it, then draw how you think it looks. (just for fun: look at streetview afterwards how it actually looks)
February 5th: Draw/paint/etc. “distinction.”
February 6th: If Cupid had something other than bow and arrow, what could it be?

February 9th: Design something based on “set of four” Whatever it is, show that it`s part of a set.
February 10th: what would your pet, or an animal you saw at the zoo, or online look like as a human?
February11th: Design a house, street or landscape based on your favourite brand.
February 12th: Design a prison for ghosts.
February 13th: Design a whole new form of transportation (doesn`t have to be actually possible).

February 16th: Design the flag for a country of stone giants.
February 17th: Paint or draw a city environment that would be ideal for frogs.
February 18th: Draw or paint a scene with the theme “liquid”.
February 19th: Draw the most interesting lightbulb that means “I just got a brilliant idea.”
February 20th: What does a tea monster look like?

February 23th: Design some houses based on the shapes of sushi.
February 24th: A rubber duck goes to a party. How does it dress itself?
February 25th: Design a dragon’s cocktail drink in a fitting glass.
February 26th: Make a drawing/painting in which something reflects in the water in an unisual way.
February 27th: Make a train interior for a train that exists in the prehistory.

The post for January can be found here.
For all the months you can eventually go to the masterlist.

Have a great week! 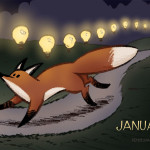